Cells are equipped with a sophisticated molecular machinery to regulate the processes that are needed for proper cell functioning. Although cells are often regarded as containers that are randomly filled with biomolecules, the subcellular organization of these molecules is extremely important; biomolecules in one part might not be functional and become activated only at a distinct part of the cell by, for example, a posttranslational modification. Studies towards the organization of activated biomolecules are hampered by the lack in chemical and biological tools that allow the identification of biomolecules on a subcellular level.

For our research we have developed a method to identify proteins and other biomolecules at a specific subcellular location within the cell by combining chemical probes together with enzymatic activation. The approach uses a spatially-restricted enzyme, arylamine N-acetyltransferase (NAT) that activates hydroxamic acid containing probes to nitrenium ions, which react fast, covalently, and under neutral conditions with nucleophilic groups of nearby biomolecules. The labeled molecules can be further recovered and identified with the use of established bioorthogonal chemistry techniques and mass spectrometry. 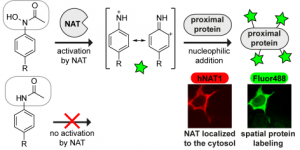